I had been eagerly waiting to spend the summer in the White Mountains of New Hampshire, and now, a few days before we were scheduled to leave, I was in bed. Science and Health with Key to the Scriptures by Mary Baker Eddy was open and on my lap as I searched for the truth that I knew would heal me. I leafed through this precious book, and I found on page 393: “Rise in the strength of Spirit to resist all that is unlike good. God has made man capable of this, and nothing can vitiate the ability and power divinely bestowed on man.”

As I read those words, I was lifted above and beyond the physical symptoms that were clamoring for my attention. A powerful surge of spiritual, mental might enabled me to rebel against the material claims and take charge of my thought. I did not need to believe that I, as a spiritual idea of God, could have a fever and be in pain. I knew sickness was not from God, and I had the divine right to rise up and assert my God-given freedom and health. I stopped being taken in by the symptoms. 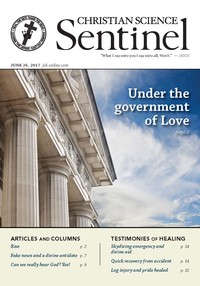