It’s common to think of worship as something one does mainly in a place set aside for it, such as a church. But at the conclusion of a lengthy conversation between Christ Jesus and a Samaritan woman at Jacob’s well (see John 4:5–42), Jesus said the time had come for people to realize that worshipping God shouldn’t be confined to a place. He said, “God is a Spirit: and they that worship him must worship him in spirit and in truth” or as the Contemporary English Version has it, “God is Spirit, and those who worship God must be led by the Spirit to worship him according to the truth.”

The conversation between Jesus and the woman had gone like this: Jesus asked her for a drink of water. She was surprised he would even speak to her, a woman, and a Samaritan with whom the Jews had no dealings. Jesus responded that if she knew who he was, she would be asking him for water—“living water,” “a well of water springing up into everlasting life,” that would quench her thirst forever. 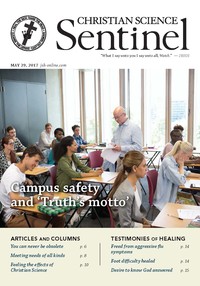