Christian fellowship—‘testimony to the world’

Note: Public court records in a bankruptcy case may seem an unlikely place to find inspiration. But the case was unusual. When more than 2,600 Ohio investors lost nearly 17 million dollars, none filed suit for restitution of the losses. Like most of them, the investment company owner—who had misrepresented the investments’ status to his clients—was a member of the Amish religious sect.

In response to the company owner’s bankruptcy filing, the Court received a request from the Amish leadership, supported by nearly all of the investors, asking that the bankruptcy action be set aside. Quoting St. Paul’s letter to the Corinthians, they explained that, rather than seeking redress through civil courts, their religious convictions provide that they work together to remedy the loss and restore brotherly affection among members. 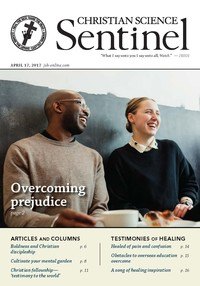