God’s help is near

The Bible contains many examples of people being provided with whatever they needed, sometimes in the most unexpected ways. For example, when Jacob was fleeing to escape his brother’s anger, he had a vision of angels and received assurance from God of His ever-presence. On awakening, Jacob declared: “Surely the Lord is in this place; and I knew it not” (Genesis 28:16). He was subsequently reconciled with his brother.

Another Bible character Hagar, Abraham’s bondwoman, was sent with her son into the wilderness. She had no more water and was afraid that the boy would die of thirst, but God showed her a well of water, where none had appeared to be (see Genesis 21:9–19). 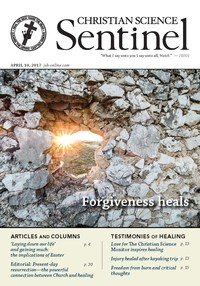