All creatures cared for by God

My daughter expressed concern the other day about what the future might hold for some animals we had seen. The first was a dog that was patiently waiting with his master, an unkempt hitchhiker, on the side of the highway. The dog looked tired, and my daughter wondered if it was being well cared for. We had also seen an orphaned lamb being sheltered in a country veterinary office. But that made my daughter think about all the other orphaned animals in the farming community. Would they be provided with similar opportunities, or sent off to an uncertain future?

I realized I needed to look deeper into what I was accepting about the animals. It was not enough to think or say that the hitchhiker probably took good care of his dog, or that there were many responsible and caring people in the world who made efforts to meet the needs of helpless creatures. 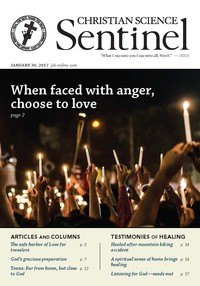