Thanks so much for the November 7, 2016, Sentinel. I am writing to voice my hope that the Christian Science publications go deeper in understanding the full range of humanity.

My son teaches, among others, homeless kids who have been displaced by gentrification in Brooklyn, New York. He remarked the other day that he felt that most articles in the periodicals were for the middle or upper-middle class, having nothing whatsoever to do with the types of problems his kids at school have. 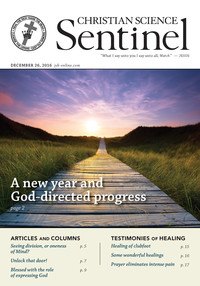