Originally written in Portuguese, this first appeared in the October 2016 Portuguese, Spanish, French, and German editions of The Herald of Christian Science.

Last year, as I was picking up my two-year-old son at school, his teacher called my attention to several places on his neck where there was a red rash. The rashes appeared to be spreading to other parts of his body as well.

I got a bit scared at that moment, because I remembered that I had had severe allergy outbreaks in childhood and as an adult. I didn’t know Christian Science back then and had relied on medicine for relief. Although I had been totally free from the condition for about ten years, I didn’t want my child to have the same experience. 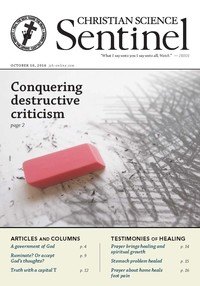