Preceding one of the most infamous decisions against human rights in recorded history, Pilate asked Christ Jesus if he was fully aware of the impact of the decision that Pilate was going to make. Pilate said, “Don’t you realize I have power either to free you or to crucify you?” Jesus answered, “You would have no power over me if it were not given to you from above” (John 19:10, 11, New International Version).

Clearly, Jesus did not depend on the decisions of corruptible men to forward his lifework and divine mission. He knew he could appeal to a higher power to control or, if need be, overthrow human judgments and their consequences. He proved this many times. However, in the crucifixion, Jesus allowed Pilate’s decision to go forward because, as Jesus had told his disciples beforehand, he was fulfilling a divinely impelled purpose. And he assured them that, contrary to appearances, they would come to see that there was still divine control. 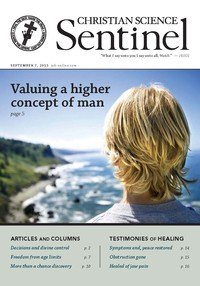