During World War I, my father sustained serious leg injuries and was sent back to England, where on further examination, the doctors felt his leg should be amputated. However, his brother had a copy of Science and Health with Key to the Scriptures by Mary Baker Eddy on his bookshelf, and although he had never taken up the study of Christian Science himself, he suggested that my father read the book, feeling sure he would receive help and comfort.

My father did read the book, sometimes well into the night, and found clear explanations of truth that brought healing to this physical condition. The operation was found to be unnecessary, as his leg was fully restored, and he was able to lead a normal, active life. From then onward my father and mother became dedicated students of Christian Science, and they served for many years in their local branch Church of Christ, Scientist. 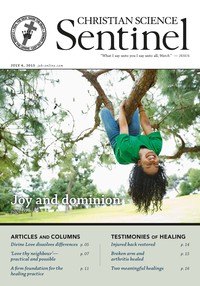