Our family came into Christian Science when, as a baby, my aunt was healed of a disease that was considered fatal. She is now in her 80s. My grandmother, and eventually my mother, became active Christian Scientists.

I was born after my parents had been married for more than a decade. Soon after my mother began studying Christian Science, my parents were able to conceive and I was brought into the world. 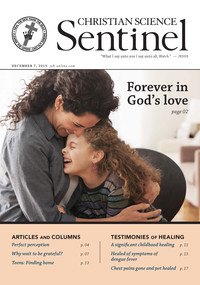