As ye have therefore received Christ Jesus the Lord, so walk ye in him: rooted and built up in him . . . abounding therein with thanksgiving.

1 | I Chronicles 28:2
David the king stood up upon his feet, and said, Hear me, my brethren, and my people: As for me, I had in mine heart to build an house of rest for the ark of the covenant of the Lord, and for the footstool of our God, and had made ready for the building.

The ark of the covenant was a sacred chest designed to house the Ten Commandments, a golden bowl holding manna preserved since the Exodus, and Aaron’s staff. The lid, made of pure gold and known as the mercy seat, represented the throne of God—His dwelling place among His people.

In this passage, David’s reign as king is drawing to a close. His desire had been to build a temple worthy to house the ark, but God made it known that this honor would be bestowed on his son Solomon. David gathers all the leaders of Israel, addressing them in a kind of farewell speech. After establishing both his and his son’s right to the throne—not by birthright but as God’s chosen—he calls for the people’s support of Solomon and graciously transfers power to him.

6 | Revelation 7:12
Blessing, and glory, and wisdom, and thanksgiving, and honour, and power, and might, be unto our God for ever and ever.

As power and might have similar meanings in English, so do the two Greek words used here, dynamis and ischus. However, neither of them alone conveys the complete picture of omnipotence. The first word emphasizes authority and ability; the second suggests strength and force.

8 | John 7:14
Now about the midst of the feast Jesus went up into the temple, and taught.

This feast, known as the Feast of Tabernacles, was an annual celebration of the last and richest harvest of the year—similar, in some ways, to modern Thanksgiving celebrations. Earlier feasts celebrated the harvesting of barley and wheat crops. This celebration focused on grapes and olives, harvested at the end of the growing season. It was likely named for the tents (the early Hebrew people’s tabernacles, or sacred sanctuaries) set up in vineyards and olive groves, near the crops being harvested.

9 | Colossians 2:6, 7
As ye have therefore received Christ Jesus the Lord, so walk ye in him: rooted and built up in him, and stablished in the faith, as ye have been taught, abounding therein with thanksgiving.

The metaphors in these verses combine to portray a vivid picture for Christ’s followers. In the New Testament, the word walk—peripateō in Greek—means almost exclusively to conduct oneself. Rooted—errizōmenos—is used to describe the strong foundations of bridges and buildings, and denotes com­pleted action. The word epoikodomoumenos, simply meaning built up or built upon, is an active participle that implies continuing action. The final descriptor in the list, stablished or bebaioō, means made firm, established, confirmed, made sure.

13 | II Corinthians 2:14
Now thanks be unto God, which always causeth us to triumph in Christ, and maketh manifest the savour of his knowledge by us in every place.

Researchers agree that the word triumph in this context carries the image of a military leader’s victory procession—and that Paul’s reference also celebrates his own, and our, being triumphed over by Christ. We become part of Christ’s victory by submitting ourselves to Christ. “In Christ” further emphasizes that it is by his power and in his name that we triumph over God’s foes. “Savour,” a reference to the incense used in a conqueror’s triumphant return from war, continues the military metaphor.

16 | John 5:4
For an angel went down at a certain season into the pool, and troubled the water: whosoever then first after the troubling of the water stepped in was made whole of whatsoever disease he had.

This depiction of an angel seems unusual for the New Testament, where angels are not seen as capricious, blessing one person while allowing others to continue suffering. In fact, according to one scholar, it is likely that this verse was not part of the original narrative. It is partially or entirely missing from early manuscripts, and the writing is not consistent with the rest of the Gospel of John. Some researchers conclude that it was added later to try to explain the unpredictable stirring of the water, which people supposed to be the source of healing. Jesus’ cure of the lame man effectively destroyed the man’s superstitious belief in this phenomenon.

principalities (citation 12; Romans 8:38) The term principalities (Greek arche) is explained variously by scholars as referring to human magistrates, good or evil supernatural beings, or a specific classification of angels. In Ephesians 6:12, principalities has a dark meaning: “For we wrestle not against flesh and blood, but against principalities, against powers, against the rulers of the darkness of this world . . . .” For the purposes of the verse in Romans, principalities serves to emphasize that every possible being or agency is powerless to separate man from God’s love.

height, depth (citation 12; Romans 8:39) Paul had begun the answer to his own question in verse 35—“Who shall separate us from the love of Christ?”—by denying that any suffering could do so. According to The Interpreter’s Bible: “Now his answer becomes more universal, including every possible factor, earthly or cosmic. . . . Height and depth are astrological terms—‘height’ (ὕψωμα) meaning the highest position a given star attains and ‘depth’ (βάθος) the abyss below the horizon out of which the stars rise. Stars— depending upon their position—were popularly supposed to exercise certain effects upon the course of human events.”

Editorial from the December 12, 1901, issue of the Christian Science Sentinel

How shall thankfulness to God be shown? It is well to express thanks in words. Words sincerely spoken from a thankful heart help the speaker and others. Words of thankfulness returned to God in sweet communion with Him, are helpful to the communicants; they bring us consciously nearer to Him; they uplift and strengthen; they aid in enlarging our spiritual nature and in clarifying our spiritual perception. But the highest and most effectual form of thankfulness is in right thinking and living. We are thankful to God when we are doing His will. We give thanks in the measure of our active obedience to His commandments, in being about the Father’s business. We are thankful in the degree of our overcoming selfishness, with its train of evils. We are thankful in proportion as we love our neighbor and do unto him as we would have him do unto us. We are thankful as we reflect the good that is ours by virtue of our real relationship to the infinite and supreme Good. Such thankfulness leads us to express it in both deed and word. We cannot help expressing it.

To read the complete editorial, go to jsh.christianscience.com/thankfulness.

Let us sing praise this day of reaping
For garnered grain, held in safe keeping,
That followed days of toil and sowing,
In patient care and quiet growing.
Each seed where dropped, left to His care,
Has leafed and blossomed fully fair.
Should we not, then, our next misgiving
Replace at once with glad thanksgiving
And know with joy that blessings more
Will heap anew each threshing floor?

By Robert Bartels
From the April 22, 1961, issue of the Christian Science Sentinel 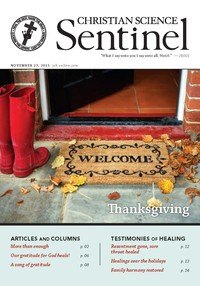