Comfort From The Psalms November 16, 2015 ISSUE

Praying through the night—with Psalm 91

A few years ago, Hurricane Sandy was moving up the coast of the United States. It was predicted that the storm would hit the Tri-State region of New York, New Jersey, and Connecticut hard. At the time, our family lived in a small harbor town. While there were evacuations being requested nearby, we were told that we should be safe and it was OK to stay put.

Early in the evening the wind picked up and was very loud. My husband, my son, and I sat together in the living room singing hymns, in order to acknowledge God’s presence as being right there and all around, despite the drama of the storm. A little later, the power went out. Our son was feeling nervous, so we continued to sing hymns and talk about God.

Send a comment to the editors
NEXT IN THIS ISSUE
Bible Lens
Bible Lens—November 16–22, 2015 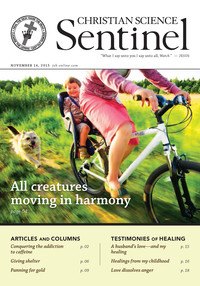