Recently, I noticed there seemed to be a particular emphasis on a certain illness—shingles—in advertisements on television, at my grocery store, and outside of local drug stores. These ads were promoting the idea that this disease is a part of us, but I recalled Christ Jesus’ statement, “Behold, the kingdom of God is within you” (Luke 17:21). I’ve learned that illness can never truly be part of us because it has no place in God’s kingdom, spiritual reality. I experienced the truth of this fact when I was quickly and completely healed of symptoms of shingles almost ten years ago.

At the time, I was a professional musician in New York City, which included working in the television/radio, recording session, and film recording studios and teaching at a university. A nervous atmosphere had developed in the recording studios—many established studio musicians, including me, were not being called for work by younger contractors, which engendered the fear of losing work. At the same time, administrators at the university where I taught were irritated with me because I pressed them to fulfill their promise to provide a secure room for my harp students and their instruments. I felt as if I was under blistering fire from all angles and thought I’d be fired from my teaching post as well as lose my position as a “first call” harpist for session work. 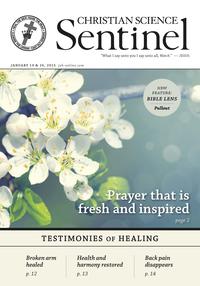