Originally written in German, this testimony first appeared in the July 2014 Portuguese, Spanish, French, and German issues of The Herald of Christian Science.

I would like to express my gratitude for a healing I experienced many years ago.

It was in the 1970s, when, one day, during my morning routine, I discovered a change in part of my body. I knew women who had had cancer, and the physical condition corresponded largely to the descriptions I had heard and read in connection with cancer. I was deeply frightened. As Job says in the Bible, “The thing which I greatly feared is come upon me” (Job 3:25). 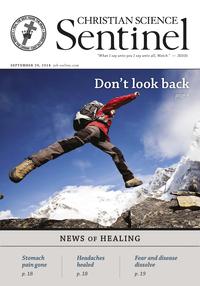