Pedro’s account was originally written in Portuguese and was published in the May 2014 Portuguese, French, German, and Spanish editions of The Herald of Christian Science.

I have a dog called Pintado (which means “Spotty” in English). He used to live on the streets, and he was very skinny and poorly cared for. Mommy, Grandmother, and I took care of him and fed him, and since then he has lived with us.

One day, Pintado escaped and went missing for many hours. I was afraid that he would be run over by a car, or that someone would harm him. It was raining a lot, and I was also afraid that Pintado had not been able to find shelter.

Pedro loves flying kites and playing soccer. He also likes playing with Pintado and with his mom’s cats. 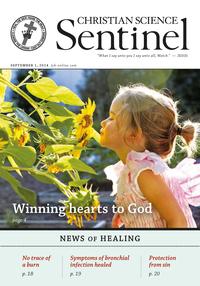