'There is no pain in Truth'

Originally written in Portuguese, this testimony first appeared in the February 2014 Portuguese, French, German, and Spanish editions of The Herald of Christian Science.

One day, a year and a half ago, I woke up with severe tooth pain. The pain was so strong that I could not eat or even think with clarity.

I called a Christian Science practitioner to help me through prayer. I explained what I thought was at the root of the problem. During a recent visit to the dentist, he’d taken X-rays and concluded that I had an impacted wisdom tooth. He’d explained that it could cause inflammation and strong pain at some point if I didn’t have it extracted. 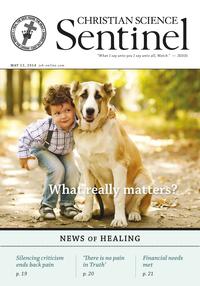