Two winters ago, I had a part-time job that required me to work four-hour shifts outdoors and in cold and damp weather. One day I noticed that some of my co-workers began to exhibit flu-like symptoms. A few days later, I began having similar symptoms.

At first I was angry that I had to deal with being sick, but then I remembered part of a sentence from Science and Health with Key to the Scriptures by Mary Baker Eddy, where she states, “… your remedy is at hand” (p. 385). This reminded me that I could expectantly pray for healing. I began by affirming what was true about me—that I am a spiritual idea of divine Mind, God. I then challenged the erroneous premise that would have me think that I was mortal, subject to sickness. My prayers included correcting my thoughts about the health of my co-workers as well. 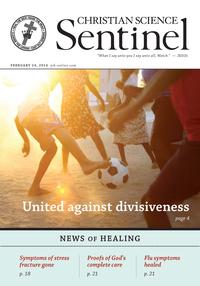