It was Christmas Eve, and I was on a flight headed north to visit my brother and his family. It was a crowded flight, and I was in the back of the plane in a window seat sitting next to a sweet, non-English speaking couple. They seemed quite protective of me, as if they sensed that my praying and reading Christmas articles by Mary Baker Eddy, the Discoverer and Founder of Christian Science, was something sacred. I thought perhaps my small, dark seat at the back of the plane was a kind of manger prepared for me.

I spent those few hours praying about the significance of Christmas, the coming of the promised Christ and Jesus’ healing mission as the Savior and Way-shower. I also spent a great deal of time praying about Life as God, and the unreality of man being born into matter, being subject to human birth, growth, maturity, decay, and the supposed grand finale of death. I thought about how eternity displaces the concept of time and, by their union with the one Mind, God, how Jesus, Moses, and Elias were able to talk with each other on the Mount of Transfiguration (see Matthew 17:1–3). 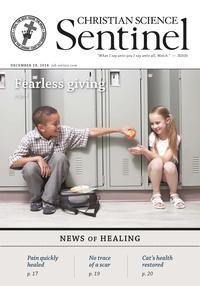