In the fall of 2002, I struggled on and off with a sore throat. I worked with a Christian Science practitioner, but after several weeks I went to a Christian Science nursing facility because the symptoms had become more aggressive. The condition wasn’t diagnosed medically, but the symptoms included inflamed tonsils, to the extent that I could not eat, drink, or even swallow for several days. I was in a lot of pain and had trouble sleeping, and I was scared about my inability to drink water.

On the second night at the facility, still unable to swallow, I decided that the next day I would go to the hospital. But early on the morning of the third day, I was listening to Sentinel Radio tapes, when one of the Christian Science nurses came into the room and talked with me for a few minutes. She said: “Two plus two is not equal to four plus a broken leg, tonsil infection, or anything else. Two plus two equals four.” This was a reminder that God created man in His own image and likeness (see Genesis 1:26, 27), and therefore man is already complete, and nothing can be added to or taken away from him. 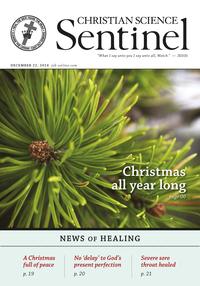