A spiritual take on popular music

Originally appeared as a Web Original on January 21, 2013

I was lying in bed watching Sport Relief, a huge TV charity event in the UK that raises tens of millions of pounds to provide aid for third-world countries across the globe. For a couple of years I’d been dealing with hay fever, and I had recently developed an annoying cough. As I was watching this charity event, many depressing images came up on the screen. I started having a coughing attack. Then, after one of the short films, which displayed an onslaught of negative images, Snow Patrol, an Irish band, started playing a beautiful acoustic version of their hit song “Chasing Cars.” This song is played all the time in the UK and is extremely popular. However, though I had heard the song many times, I’d never really taken time to listen to the lyrics.

As I stopped coughing briefly, there was a moment of silence, allowing me to listen to the song. These lyrics reached my ears:

Robert Witney is from Fleet, Hampshire, England. He is currently a student at Principia College in Elsah, Illinois.

Send a comment to the editors
NEXT IN THIS ISSUE
Spiritual Lens
"The substance of all devotion..." 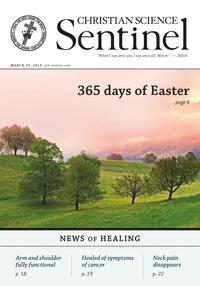