After being blessed with two lovely boys of our own, my husband and I cherished the possibility of adding a little girl to our family by way of adoption. We began the application process, and after six months of meetings with a counselor, the waiting period began. I like to think of it as a discovery period. I held on to this citation from Science and Health with Key to the Scriptures by Mary Baker Eddy: “There can be but one creator, who has created all. Whatever seems to be a new creation, is but the discovery of some distant idea of Truth; …” (p. 263). I reasoned that since God is the only creator, we weren’t in reality waiting around for a mother to give birth to a baby; rather, we were growing in understanding that this precious idea, already created, would come into our experience as our concept of God’s fatherhood and motherhood grew. It was such a special time of listening and praying.

When sharing our hope of adopting with friends and family, I was surprised by some of the comments we received. However well-intentioned, we were met with, “Oh, you’ll be waiting five or ten years for the infant you are hoping to adopt.” One friend even mentioned she couldn’t love a child that wasn’t her own. I thanked God, divine Love, for the deeper understanding of His allness and the conviction that there really can be only one Parent, God, who fathers and mothers all of us as His children. 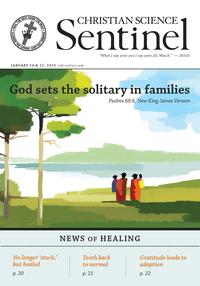