Haiti’s right to food and water

Recent news reports about conditions in Haiti, a year after a massive earthquake struck the country, reveal many people are still struggling to obtain the basic necessities of life, including shelter, food, and clean water. More than a million still live under tarpaulins or temporary shelters, and while access to water supplies has improved, many Haitians still need access to water purification systems. The cholera epidemic has reached new levels, and for many—both inside and out of the country—the situation continues to appear desperate. A New York Times report reads in part, “After a year of almost unfathomable hardship in Haiti, there is little reason to be hopeful now” (Deborah Sontag, “A Year Later, Haiti Struggles Back,” January 3, 2011).

But prayer can play a powerful and effective role in ensuring that food, clean water, and other supplies are readily available to the people of Haiti. Mary Baker Eddy, who discovered Christian Science, encouraged her students to pray about world problems, and she knew from experience that those prayers carried with them God’s healing power.

Melanie Ball is a Christian Science practitioner. She lives in Thousand Oaks, California. 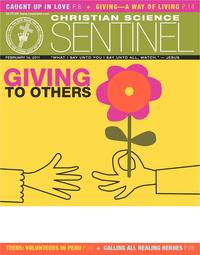