Stay in the race

The first verse of the 12th chapter of Hebrews is the cornerstone of this week’s Bible Lesson, titled “Probation After Death.” We hear it three times: in the Golden Text from the New International Version, in the third section from the King James Version (citation 11), and in the sixth section it’s quoted in Science and Health (p. 20, cit. 28). Clearly, this verse encourages us to persevere in the race marked out for us, be patient in the race set before us, and as Mary Baker Eddy wrote, “. . . put aside material self and sense, and seek the divine Principle and Science of all healing” (p. 20).

Stay in the race to the finish! It doesn’t matter which place we come in. We simply need to keep moving forward. Some of us have trials and tribulations to pass through along the way, which may seem daunting, or even remarkably difficult, but there is always help available. God knows us and wants us to finish with joy, providing helping hands, keeping us from becoming buried in matter, and “unwinding one’s snarls” (Science and Health, p. 240, cit. 14). Finishing is what counts, not winning.

Abigail Fuller has a master’s in physics, and is working on her master’s of divinity at San Francisco Theological Seminary. She lives in San Anselmo, California. 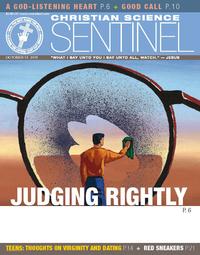