One day this past February, while I was talking with a Christian Science practitioner about my fear that some conditions were very difficult to heal, God sent me this message to ponder: "ancient belief, pure delusion." I recognized the words as being from page 567 in Science and Health with Key to the Scriptures by Mary Baker Eddy: "That false claim—that ancient belief, that old serpent whose name is devil (evil), claiming that there is intelligence in matter either to benefit or to injure men—is pure delusion, the red dragon; and it is cast out by Christ, Truth, the spiritual idea, and so proved to be powerless."

I thought about how God was my Creator and I was made in God's image and likeness, and how He saw His creation as "very good," according to Genesis 1. I affirmed that I couldn't ever be tricked into believing a "red dragon" of fear. Instead, I could be confident, relying on Christian Science, the law of perfect God, for healing. And I had a lovely prayer–filled day. 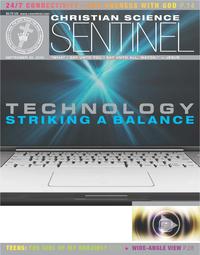