THE BOSTON LANDMARKS Commission (BLC) has released a report on the Christian Science Plaza, recommending that the Plaza be designated a Boston Landmark.

Church representatives do not expect the proposed landmark designation to impede the Church's plans for its Plaza Revitalization Project. Excluded from the BLC's landmarking recommendation is the area on Belvidere and Dalton Streets behind 101 Belvidere Street (the former Colonnade building), the location for the majority of the new development being proposed by the Church. (A report on the Church's proposals will be ready next month.)

Send a comment to the editors
NEXT IN THIS ISSUE
SENTINEL WATCH
GULF OIL SPILL: OUR ROLE IN THE SOLUTION 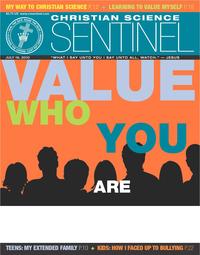