AFTER TWO FAILED MARRIAGES, I was giving up. Like many women, I had believed in fairy tale romance. But the men I met did not seem right for me. Although most of them were accomplished and charming, many showed little interest in God or even spiritual ideas, which were very important to me. In addition, I could think of few happy marriages among people I knew. In fact, I had witnessed people who had been so disappointed in love that they had simply given up on life. I realized that I couldn't count on romantic love.

I decided to isolate myself, moved to a new location, and took a different job. During the day I worked as a writer. On weekends I was a companion to an elderly lady, living in her guesthouse on the edge of a remote canyon. 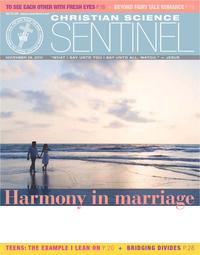