HEALED OF A BURN, AND FREE FROM FEAR

As an adult, I became interested in Christian Science and started to read Science and Health. That led me to attend a Christian Science church service, where I was warmly welcomed. I loved what I was hearing and began to study the Christian Science Bible Lesson. My life started to change as I embraced this new way of thinking about God as divine Love and myself as His image and likeness. Healings followed. I stopped smoking. I became much more patient. The teachings of Christian Science helped me be a better mom to my three children. And I became less fearful in so many ways.

Once when I was preparing a meal, cooking oil splashed onto my face. There was burning and pain. The pain was healed quickly when I remembered the "boiling oil" part of this phrase from Science and Health: "The divine Love, which made harmless the poisonous viper, which delivered men from the boiling oil, from the fiery furnace, from the jaws of the lion, can heal the sick in every age and triumph over sin and death" (p. 243). Although the pain swiftly faded, I came away from the incident with burns covering my face, and the vision in one of my eyes was affected. I was worried that I'd be left with a scar and that I'd have to be out in public while my face looked like such a mess. There was a strong impulse not to show up at church that next Sunday and perform my duties as First Reader. 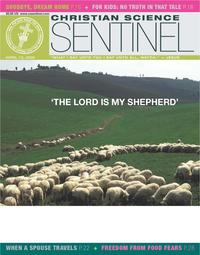