At the time of the terrorist attacks in Mumbai late last year, I was listening to a radio talk show. The host asked whether future attacks through that same type of sophisticated operation could be prevented in the United States or elsewhere in the world. The consensus of the experts was "no." At the same time, a headline in The Christian Science Monitor pointed to the question "New template for terror?" (December 3, 2008). This article reported that a new approach to the defense of cities everywhere was needed to prevent copycat attacks.

From a spiritual perspective, in addition to better intelligence and technology, this new approach of preparedness should include prayer. As readers of the Sentinel are well aware, prayer is powerful, and there are many accounts (told and untold) about how acts of violence in the world have been thwarted through people's spiritual preparedness and receptivity. 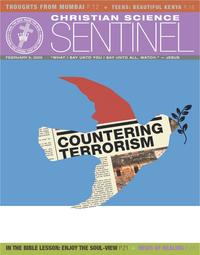