an Indonesian's prayers for Padang

At the end of September, a 7.6 magnitude earthquake struck the Indonesian island of Sumatra, leading to tsunamis and flooding there and also in Samoa and American Samoa. Other storms had also been in the region, primarily affecting the Philippines.

Following the earthquake and storms, Ingrid Peschke, the Sentinel's managing editor, spoke with Djoni Darmadi for a short audio interview on spirituality.com. Djoni is a Christian Scientist, who was born in Padang, the capital city of West Sumatra, but presently lives in Jakarta, the capital of Indonesia. They talked about ways to pray for the survivors and for the prevention of such devastation in the future. 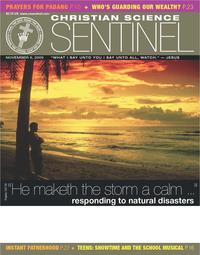