At the end of November, a horrifying series of terrorist attacks took place in Mumbai, India. Nearly 200 innocent people of all nationalities and ethnicities were killed, and the gunmen who carried out the raid are believed to be members of the Lashkar-e-Taiba, a terrorist group that runs training camps in Pakistan ("Pakistan on tightrope with militant raid," The Christian Science Monitor, December 9, 2008).

There are unresolved issues about who might be responsible and whether the Indian government was adequately prepared. Inevitably, questions surface. How can our governments be more alert to protect their citizens? How can ordinary people protect themselves? And a final question also presents itself: What can be done to destroy the root cause of such acts of desperate hatred?

Jeremy Carper is a Christian Science practitioner in Fredericksburg, Virginia. He worked for the United States Department of State for many years. 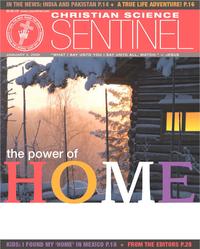