BREAK OUT OF THE GENETIC CODE

TODAY  genes feature increasingly in news stories and bulletins: from the triumphant 2003 press conference announcing that the human genome had been sequenced, to alarmist concerns about scientists "playing God"; from the pros and cons of genetically modified food, to the ethics of gene testing, gene therapy, and genetic engineering; from reports that genes can predispose individuals to certain diseases, determine sexual orientation, or even determine one's belief in God.

Then there are what appear to be tangibly good things: Don't we all benefit indirectly from DNA testing in criminal investigations and trials? Likewise, maternity and paternity tests have helped establish another kind of social justice.

Daniel Scott is a Christian Science practitioner and lecturer in Yorkshire in the United Kingdom. He holds a doctoral degree in mathematical physics from the University of Cambridge. 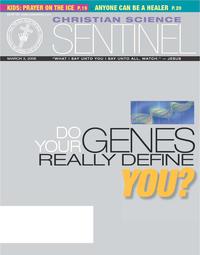