EVEN IN THE DARKEST THICKET OR LOUDEST DEMONSTRATION, DIVINE TRUTH IS ABLE TO SPEAK AND TO PROTECT REPORTERS AND OTHERS IN DANGER.

FOR THE SAFETY OF JOURNALISTS

THE CHRISTIAN SCIENCE MONITOR has pioneered the kind of clear-eyed conflict-zone journalism that's given its readers reasons to care beyond their own borders—and many of those readers respond with prayer. But readers' prayers also have gone out in support of those doing the reporting.

From Edmund Stevens, the first Monitor correspondent to cover the fighting in World War II, to the present, the newspaper's reporters have been in the thick of things. Some have faced great danger. Among them were Elizabeth Pond in Cambodia, David Rhode in Bosnia, and Jill Carroll in Iraq. Pond was captured by insurgents, Rhode put himself in harm's way when he uncovered the Srebrenica executions, and Carroll was taken hostage, but all were released unharmed. 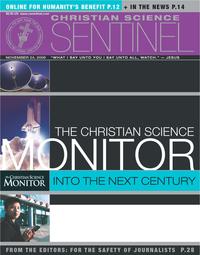