PUTTING A STOP TO SIBLING RIVALRY

CONSTANT FIGHTING, bickering, competing, and jealousy—they're all the classic signs of sibling rivalry that most parents have confronted at one time or another. But this isn't exactly a new phenomenon. Look at the story of Joseph in the Bible. Joseph's brothers' jealousy ran so deep that they sold him into slavery and deceived their father into thinking he'd been attacked and killed by wild animals. The rivalry parents see in their children today seldom goes to those extremes, but many parents find it's an issue driving them to prayer.

When I was growing up, my two siblings and I just couldn't get along. But now that we're adults, we're all good friends with a very special bond. What caused this turn-around? I believe it was, among other things, the fact that we let go of past grudges and began seeing each other in a more Christlike light—one that acknowledged our deeper spiritual natures.

Julie Trevor-Roberts is a Christian Science practitioner. She lives with her family in Marietta, Georgia. 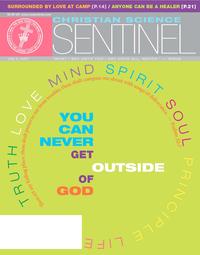