About two years ago a spot on the side of my nose became irritated and unsightly. Wearing sunglasses became difficult as well.

I realized that it was time for me to apply what I knew from my study of Christian Science to eliminate my fear of this difficulty. As a lifelong practicing Christian Scientist, I've always relied on scientific prayer for healings of all sorts. For example, I've experienced freedom from a fear of public performances, and healings of a severely cut finger and a sprained back. This reliance begins from the standpoint of God's law, as established in the first chapter of Genesis, in which God created man in His own image and likeness (see 1:26). 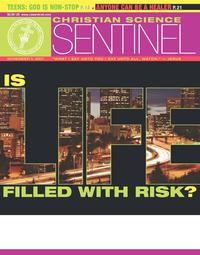