COULD WHAT PEOPLE ARE MADE TO THINK AND BELIEVE ABOUT THEMSELVES ACTUALLY MAKE THEM SICK?

A MEDICAL STUDY released a few weeks ago has had us thinking of Shakespeare's words in Hamlet, "There is nothing either good or bad, but thinking makes it so."

The study looked at healthcare spending and illness rates in the United States and England ("Disease, Disadvantage in the United States and England," Journal of the American Medical Association, May 3, 2006), and found that Americans spend more than twice what the English do on healthcare. And yet, say the report's authors, "Based on self-reported illnesses and biological markers of disease, US residents are much less healthy than their English counterparts." 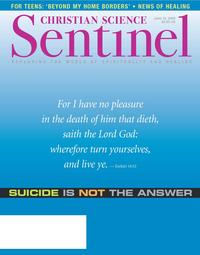