AFTER DRIVING north for several hours through sprawling greater Detroit, I was ready for a few days' vacation in beautiful northern Michigan. But the TV that morning and the news on the radio were taking a toll on my normally upbeat disposition—more soldiers killed in Iraq, increased American hatred abroad, deeper intransigence in the Middle East, dire predictions about the US economy, and poor job figures. Each story was weighted with negative commentary, doom, and political finger-pointing.

As I entered the sparsely populated woodlands of northwestern Michigan, most of the radio stations were fading out, so I pushed the seek button. It sputtered almost all the way around the dial before setting on the one clear station available. 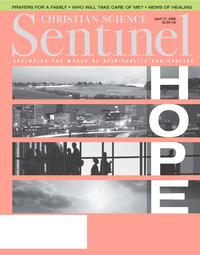