For the glory of God

How Christian Science impacted the life of composer Serge Prokofiev.

"Christian Science is helping me enormously in my music. To say more exactly—I do not see anymore my work outside of Science."

So wrote Serge Prokofiev, one of Russia's leading 20th-century composers, on January 31, 1933, to Christian Science practitioner Eve Crain in Cleveland, Ohio. Miss Crain had evidently prayed with him when she lived in Paris in the 1920s. Prokofiev himself lived for many years in France. In fact, it was while living in Paris,  where he and his new bride, Lina, had moved in the autumn of 1923, that Prokofiev was introduced to Christian Science. He recorded in his personal diary for May 25, 1924: 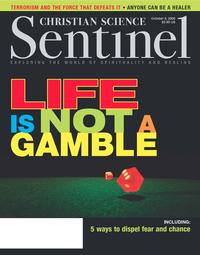