Balaam and the donkey

A blessing is forever

Things were going well for King Balak and his kingdom of Moab. So he wasn't too pleased to look out his window one day and see a whole new tribe of people camped below by the river Jordan! These people, the Israelites, had come all the way from Egypt. They wanted to share the land of Moab. But King Balak was not so sure about this. He could see very well that the Israelites were powerful. He was afraid to fight them. Instead the King sent his servants to ask Balaam to help him.

Everybody knew the seer Balaam who lived in Pethor by the river Euphrates. He had a gift for talking with God. King Balak wanted Balaam to call down something bad on the Israelites. That way he hoped to get them to go back to where they came from.

Send a comment to the editors
NEXT IN THIS ISSUE
LET YOUR LIGHT SHINE!
Thank you, Mr. D. 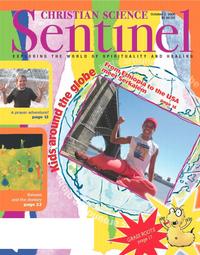