HEALED AFTER RUNNING A 'HOLY' RACE

I had always enjoyed running short distances, but had never really considered myself a "runner." It wasn't until a friend suggested I attempt longer distance running that I decided to give it a try.

In February 2004, I prepared for my first 10-kilometre (6.1 mile) race. I trained well, ate the recommended foods, and tried to get the necessary amount of rest. But a week or so before the race, I found myself with a swollen ankle and knee, feeling miserable and despondent. Friends who were doing the race with me appeared to have no difficulties. I attempted to pray about this, but I was struggling. My running time was getting slower, and this only increased my frustration. 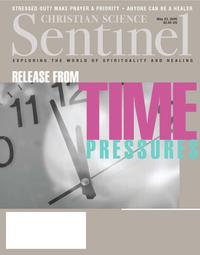