ROADMAP FOR THE RISING GENERATION

THE SIGNS ARE OUT THERE, THOUGH SOMETIMES it's tough to spot them. The rising generation—late teens and early twenty-somethings—is a profoundly spiritual one, hungering for a sense of the holy, alive with openness to God and to others, fiercely committed to equality. Yet, because study after study documents their skepticism of institutional religion, and because of the unorthodox path they often take toward the spiritual, it requires a discerning eye to glimpse where they really want to go, and how to help them get there.

Let's face it. Organized religion wasn't meant to be an end in itself. It was supposed to be a bridge leading to the spiritual. But somewhere along the way large blocks of organized religion settled for bequeathing themselves to each new generation. Now they've come to one that doesn't especially want that bequest—a generation that is, with increasing frequency, taking other roads. 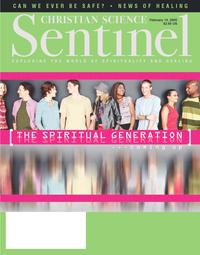