THINK BACK to December 26, 2004, to the tsunami that struck South Asia and the staggering loss of life, which approached a quarter of a million. Then think of the almost immediate floodtide of aid from around the globe. For example, in just ten days the UN received from its member nations 80 percent of the aid requested. Organizations such as the Red Cross and Oxfam were instantly deluged with donations from individuals. And, by most accounts, the aid, swiftly put to work, changed the course of the calamity. So many lives that might have been lost in the aftermath were not. Rescue and recovery efforts—well run and well funded—turned back the tide of tragedy again and again.

Fast-forward to August 2005, to Hurricanes Katrina and Rita that struck the Gulf Coast of America, and to the tragic loss of more than one thousand lives. The torrent of aid that poured in from across the US and around the globe dwarfed several of the earlier records set following the tsunami. Again, the aid repeatedly restarted and restored lives and families and businesses.

Channing Walker is a contributing editor and a Christian Science practitioner. He lives in Glendora, California. 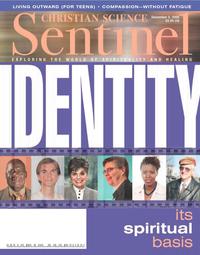