How prayer brought calm at sea

I was in a situation once when I had to face the unpredictability of nature. I had been working in the Arctic as a cook on a seismographic research vessel, and our crew was scheduled to return the ship to the Gulf of Mexico for the winter, which would mean being on the open sea for more than three weeks. It was late September, and there was an awful storm brewing. Although it was against my instincts to jump on a ship for a long ocean trip in that kind of weather, I had no choice.

In order to find some peace, I had to shake the fear and uncertainty I was feeling. A friend of mine who had worked in Alaska once told me that the storms in the open expanse of the North Pacific can create swells of 100 feet at that time of year. We weren't really expecting those conditions, but I was concerned that our top-heavy ship, which had a shallow draft, wasn't built for the sea conditions we might find. 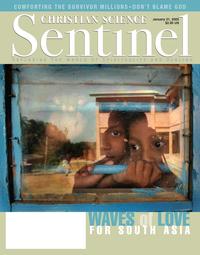