A SOUTH KOREAN'S PRAYER FOR REUNIFICATION

My prayer goes out every day to the 22 million people facing indescribable hardship in North Korea. In my prayer, I remember that North Koreans—my spiritual brothers and sisters are all beloved sons and daughters of God, filled with wisdom and understanding, hope and courage, faith and love.

In Pyongyang, North Korea's capital city, Christianity was booming before the Second World War. But the government destroyed all the beautiful churches and cathedrals in the 1950s. Christian Science was introduced to southern Korea in 1945 by American Gls who were Christian Scientists, but there has been no Christian Science activity in the North for many years. Yet, those of us in South Korea still pray for all Koreans. 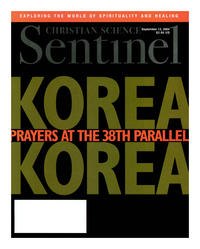