I form part of a feminist movement that decries the continued reference to God using only the male personal pronoun. Of course, God is neither He nor She, but it is important either to strive for gender balance or to use language that is gender neutral. Either of these pronouns ensures that God-language becomes concertedly inclusive of women because it does not favour the masculine over the feminine.

It has been a feature of Christian Science publications over the century that even in a tradition that incorporates the feminine in the divine, God has almost invariably been referred to as masculine, although in more recent years I've seen an acceptance of more inclusive language, i.e., God is referred to as She. I've come to accept over the years that The Christian Science Publishing Society provides space for however correspondents wish to refer to God, i.e., as either Him or Her, or using neither of those personal pronouns. I've accepted that this is a good way of honouring an individual's experience rather than insisting on politically correct language. 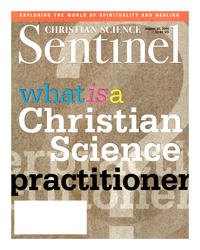