A MAN ON THE STREET brought me an angel message one morning. I first saw him sitting on a park bench about a block from my downtown office, eating a banana. As he stood up to make his way toward me, only his face, long white hair, and beard were visible through the tattered sleeping bag he was using to cover himself from the chilly morning air. His build indicated he was probably once a tall, strong man. But now I could only perceive a shadow of the potential that lay within that partially clothed and hunched-over figure.

Somehow I knew we were supposed to meet. I felt drawn to him. Not knowing exactly what I would say, I still thought I had some significant message to lift him out of his apparent disarray. That particular morning I had spent in prayer, thinking about my purpose—my spiritual purpose. I had an especially clear insight that morning that each of us, as the creation of an infinite, divine, spiritual Being, inherently has a reason for existing. That morning I was prepared to follow the gentle leading of eternal Life's loving call through any door I was directed. With great expection I had fearlessly gone forward, expecting to experience the touch of the Christ in my life. This man must have had a similar path that morning.

Shelly Richardson lives in Eugene, Oregon, with her husband, Philip, and their two girls, Camille and Holland. 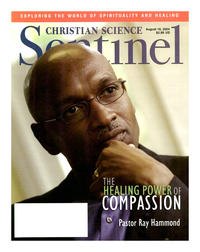