There Is An Old, And Very Bad, Joke that says anxiety is no laughing matter. The fact is, it's really not—especially for folks who chronically suffer from it. One magazine that summarized several diagnosed forms of anxiety calculated that the total number of people afflicted was 13.3 percent of the overall population in the United States.

But that old, bad joke isn't even funny for many people who, while perhaps not debilitated, nevertheless find apprehension, uneasiness, sometimes dread, about the future, to be inevitable elements of modern day existence. The other day I was speaking with a woman who, for several years, has worked securely in a moderately sized business but now feels very insecure in her job. Another woman told me recently of her apprehension over an upcoming airplane flight. Since 9/11, many people have felt concern about being in, or even near, tall buildings, trains, and shopping centers.

Tom Black is a contributing editor. He lives near Detroit, Michigan.

Send a comment to the editors
NEXT IN THIS ISSUE
Article
How do you deal with STRESS? 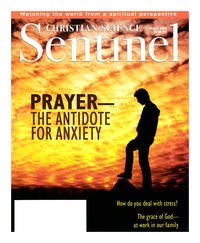