On the first morning of a business trip to California about six years ago, various symptoms that I had been praying about for many months came to a head. I had had numerous brief episodes in which a series of bodily malfunctions, including abnormal bowel function, would occur one after the other, to the point where it became predictable what to expect next. Each bout would end with a feeling of extreme discomfort all over my body.

Throughout this whole period of several months, there was an almost constant overall feeling of being less than my normal 100 percent. These attacks, which at the beginning had been a week or two apart, had started getting closer together at the time I made my trip. 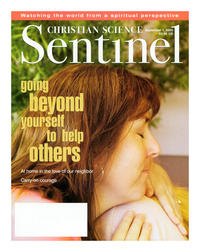