Not a chance in the world

MAYBE IT'S THE MONSOON-LIKE late summer we've been having in the northeastern United States. It's felt like we've been stuck in a global holding pattern of daily downpours. Dark clouds on the horizon hint at concerns more serious than repetitive weather—another hotel bombing in Indonesia with suspected Al Qaeda links, casualties in Iraq, nuclear saber rattling in North Korea, shifting terrorism alert levels.

Yet many of us aren't in the same place, spiritually and mentally, that we were months ago. We at least know we need to stay alert. To be watchful but not shuttered in fear. To find our own ways to "pray without ceasing," as St. Paul urged in one of his letters. 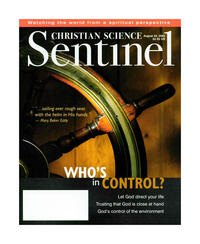