Last year, on September 11, I was working for the local newspaper, the Lewisporte Pilot. Covering the story was very interesting because I visited all the different venues in town, and talked to volunteers. They were pretty amazed because they had seen the attacks on television and just a few hours later they were being affected. They were all part of the story. People were certainly moved in that regard.

And people really, really enjoyed just being a part of it. It wasn't that they were doing anything extraordinary, because it was just a matter of doing what had to be done. We'll never forget it, for sure. People are amazed because of the attention this little town has gotten over the last year. And that affects us in other ways, too, because we still don't know what we did. The thank-yous that have come back from people have been phenomenal. I guess people here are utterly changed. 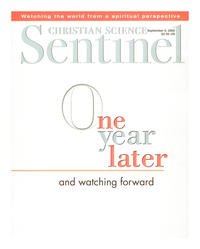