To be a force for positive change

Candelaria Silva directs ACT Roxbury Consortium, a nonprofit organization devoted to economic development fueled by the arts, culture, and trade. Ms. Silva lives and works in Boston's Roxbury neighborhood, which once had Jewish, Irish, and other immigrant enclaves, but for more than a half-century has been "hometown" to Boston's African American community. The Sentinel's Warren Bolon talked with Ms. Silva about the arts as an engine for community development, about her spiritual roots and search for meaningful worship. Ms Silva began the conversation by explaining what makes Roxbury distinctive.

Candelaria Silva: Roxbury's African American population has been there for many years. They feel a sense of ownership in the community. [Even African American] people who don't live in Roxbury come there [to shop, worship, visit friends and relatives.] The African American services—the barber shops, the beauty supply places—are very important. And there is a concentration of really wonderful churches. People who don't live in the community will often come to Roxbury to find a church where faith is celebrated in a way that's familiar to them. It's also a diverse community with many different income levels. There's a huge artistic community in Roxbury. One of the things that we build on as a community is the idea of having consistent artistic celebrations, so we do an annual Roxbury arts series.

Send a comment to the editors
NEXT IN THIS ISSUE
Article
ART FROM AFRICA, FOR ROXBURY AND BEYOND 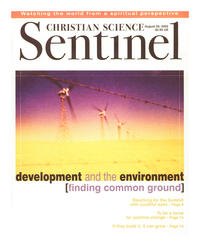